The presentation and deliberation are based on a study finding made on “Ad-hoc Regional Security arrangements and APSA: A Case Study of ACL-GLR, MNJT, and G5 Sahel Force”. 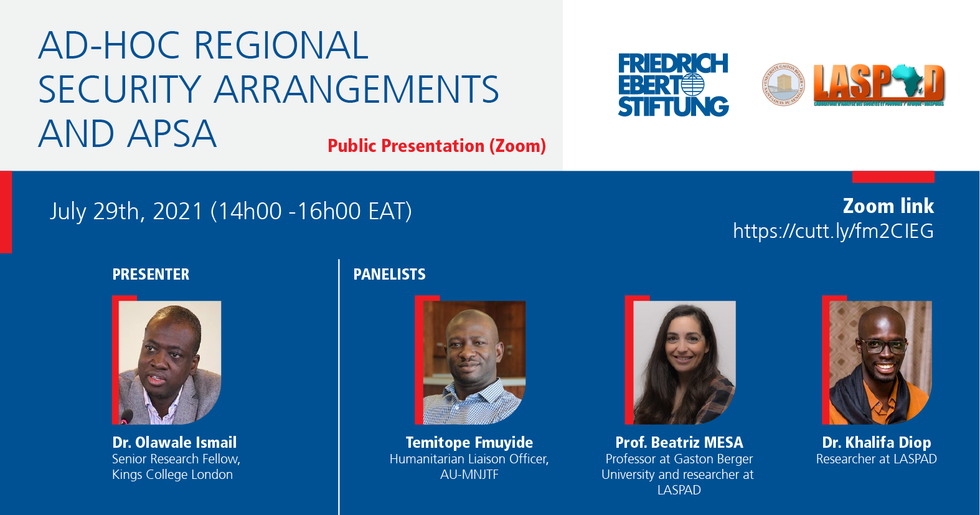 During the public presentation, the findings of the study have been scrutinized by a specialist community considering the gains and drawbacks of these ad-hoc setups, their future implication, and influences on the AU-APSA process. The study was challenged if actually the opportunities these mechanisms brought outweighs the challenges, they pose mainly in analyzing if these ad-hoc mechanisms are producing security for the people and if they integrate the human security approach. All in all, the discussion helped to sensitize relevant actors and move forward the debate on regionalized security threats in Africa and APSA response, created awareness on the influences of these ad-hoc setups on the collective security apparatus of AU, awaken the thinking of relevant actors to look deeper into the setbacks the APSA framework has in responding to regionalized and instantaneous security threats.

The Friedrich-Ebert-Stiftung (FES) is a non-profit German foundation funded by the Government of the Federal Republic of Germany, and headquartered in Bonn and Berlin. It was founded in 1925 and is named after Germany's first democratically elected President, Friedrich Ebert. FES is committed to the advancement of both socio-political and economic development in the spirit of social democracy, through civic education, research, and international cooperation. Friedrich-Ebert-Stiftung is the oldest political foundation in Germany.